Looking back at how far she’s come makes Ana Marinez, at 26 years old, smile with satisfaction. In 2009, she came to the U.S. with her family from the Dominican Republic and didn’t speak English. She was 17 and had to finish her senior year of high school. It was hard. Her head spun with new vocabulary and sentence construction.

Some days, she thought about giving up. But that was not an option for her. Ana graduated from high school, earned her bachelor’s degree from FIU and now she has an eye on graduation for her master’s degree, which will happen soon. She looks forward to walking across the FIU Convocation stage, once again, to shake President Rosenberg’s hand as he congratulates her for earning her master’s degree in Computer Engineering: Network Security.

“I definitely am living my dream,” proclaimed the FIU graduate student. 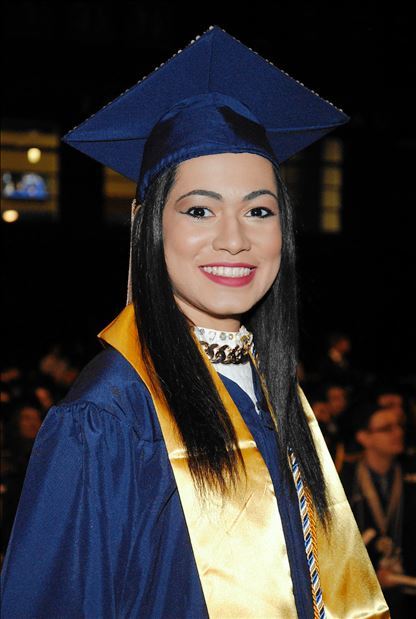 Ana earned her bachelor’s degree from FIU. It hasn’t been the easiest road, but with FIU’s resources, Ana received the help she needed with writing, language skills and communicating.

Odds may not favor students like Ana—English language learners, many times, face more challenges. The odds don’t scare her, though. Instead, they inspire her to work harder like many other FIU students just like her. Together, they help make FIU the No. 1 school in the nation producing Hispanic engineering majors.

With unrelenting determination, she’ll be making her way in a largely male-dominated field. Even though the computer engineering industry is projected to continue growing at a rate of between 15 and 20 percent over the next five years, the vast majority of computer science positions are still occupied by men.

“I would love to see more girls joining the field. It’s really fun and challenging. And there are a lot of opportunities for women,” stated Ana.

She described how there are never dull days in cybersecurity because it’s an ever-changing industry and one that Ana’s grateful to be working in while she earns her master’s degree.

Working while being a student is nothing new to Ana. Even while in high school, she worked in her family’s import export business, but that work never satisfied her dream for more.

FIU professor Manoel Oliveira saw Ana’s talent and fortitude, so he pushed her to do what she really wanted to do—a career in information technology. He even arranged for her to get a free used computer when she couldn’t afford one.

“Ana was a student that was much more passionate about how things worked and that is the key for what every engineer needs. Engineers like to solve problems—this was Ana,” recalled Oliveira who pressed her to pursue cybersecurity.

Ana credits her first job to FIU. Through the university’s career services, she obtained a coveted Miami internship with a large company that offered her a full-time job at the end of her internship.

After working for the company for two-and-a-half years, she moved on to a bigger company in Miami—a human capital management software company—and a position with more responsibility. Right about the same time, she started her master’s degree with FIU, fully online.

“Online education fits my lifestyle and career and offers access to current information in the industry,” she explained as she spoke about her passion for digital forensics and investigations—areas she wants to concentrate in. “There are a lot of things I need to learn.”

The education she’s receiving has opened her mind to the thousands of possibilities that exist in cybersecurity. And because the National Security Agency and the Department of Homeland Security have designated Florida International University as a National Center of Academic Excellence in Cyber Defense Education, Ana is confident about the techniques and skills she’s learned. She’s been able to apply many of them to her current position as a security analyst performing reverse malware engineering, she said.

“The courses in the degree give you a different perspective and allow you to understand the mindset of a hacker and the different motivations. You also learn why laws are so flawed in cybersecurity and what is being done,” she explained.

Her coursework also prepared her to acquire the most in-demand professional certifications including Network+, Security+, and Certified Ethical Hacker (CEH). Ana is looking forward to completing the Global Information Assurance Certification Forensic Analyst (GCFA) from SANS.

Ana still helps her family’s business, but now, she helps as a cybersecurity adviser. She has also worked on outreach programs to encourage more young girls to pursue computer engineering and cybersecurity.

In five years, Ana sees herself as a subject-matter expert with a more senior-level position. She enjoys stopping hackers.