Only about half of those in foster care finish high school, and less than 3 percent graduate from a four-year college. At 14, Valeria Butler didn’t know the statistics regarding children in her situation—she was determined to go to college.

Butler’s path was not easy, but with the help of Educate Tomorrow and online learning with Florida International University, she proudly walked on stage at a December 2019 commencement as her name was announced in the auditorium. She graduated with honors and obtained her bachelor’s degree in psychology. 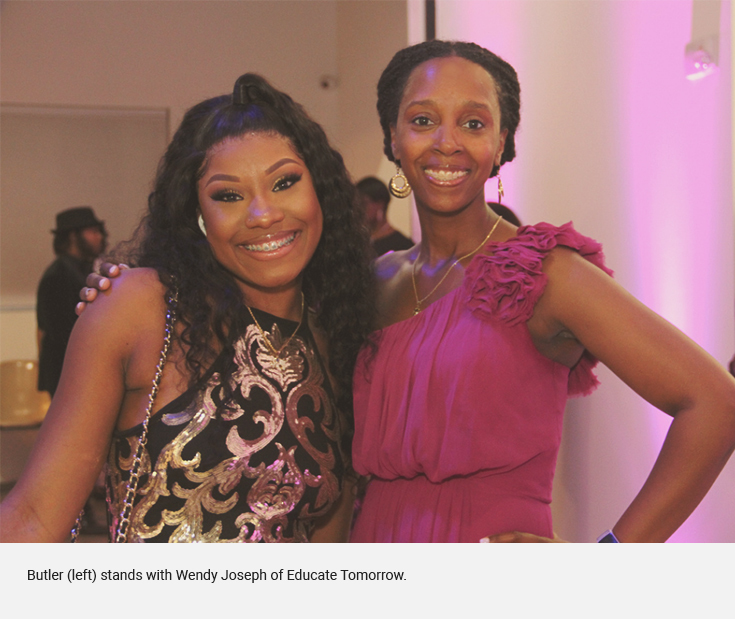 Looking out in the audience, she could see her “family”— the social workers from Educate Tomorrow, an organization that assists those in foster care with wrap-around services to help them earn a college degree. They had been on this journey with her from the time she turned 18. They advocated for her when no one else would.

Butler had been a good student in the gifted program at her middle school before her life began to fall apart. Her adoptive mother, reeling from a recent shock and life stress, began to spiral out of control. Heart-wrenching abuse and neglect ensued.

“She stopped feeding us, she stopped clothing us, and from there, it kind of trickled. When you’re 14, you don’t have anywhere to go,” she recounts and explains she was placed in a group home with seven other girls. Those days were difficult, confusing and emotionally draining, she says.

“I think foster care was just a wake-up call. I had to wake myself up for school. I had to get my own food. I had to get a job at 15. I worked at Winn-Dixie. I had to buy my own school clothes. I had to pay for my own phone. It was the start of independence. I learned how to be self-sufficient,” she says.

As if things weren’t hard enough, says Butler, the other girls in the group home made it even more difficult. They bullied her for choosing to go to school.

“I was the only one who would get up and go to school. I just knew I had to finish school. I told myself that education is important. You go to school and make something of yourself or you’ll be nothing and have nothing,” she recalls. 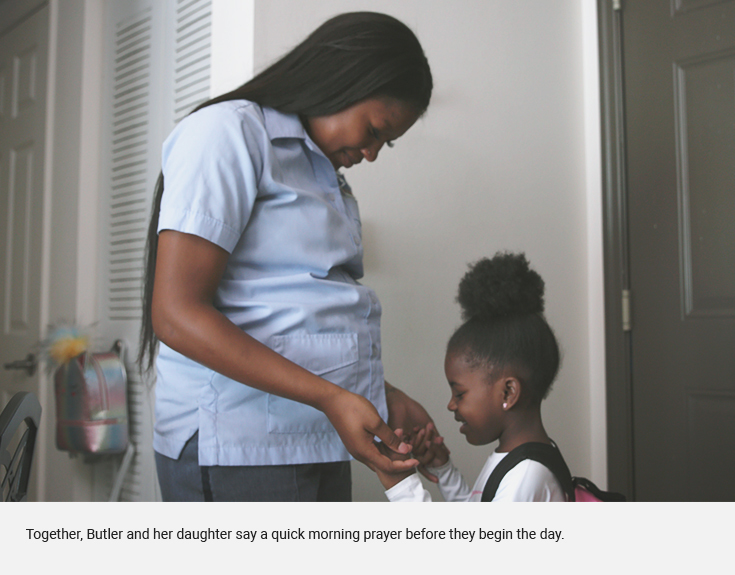 Then a curveball hit her. Butler became pregnant in 11th grade. She missed so much school that she was threatened with being kicked out. The embarrassment was more than she could bear—she cried a lot during that time, she remembers. Her principal told her pointblank that she’d never graduate and the odds in life would be stacked against her. Butler doubled down on her studies and achieved her GED. Soon after, she turned 18 and aged out of foster care. Turning 18 meant she would be instantly homeless and on her own.

“You realize you’re an adult. And I had to realize that with a one year old. For me, my lowest point was fresh out of high school, having to start Miami-Dade College with a baby, no place to stay, no car—that was a low point for me,” she recounts. The crying continued, she says.

According to Children’s Rights, an independent nonprofit organization that advocates for children’s welfare, “In 2017, more than 17,000 young people aged out of foster care without permanent families. Research has shown that those who leave care without being linked to forever families have a higher likelihood than youth in the general population to experience homelessness, unemployment and incarceration as adults.”

Butler was homeless. She slept on the couch at many friends’ homes. Sleeping here and there, “We kind of did that for a while,” she admits.

“I really only think about my baby,” she says and explains that she wanted to be the parent she never had, and to give her daughter a better life. With incredible tenacity, Butler achieved high marks from Miami-Dade College and her social workers helped her transfer to FIU. In the meantime, she obtained a good job and an apartment. 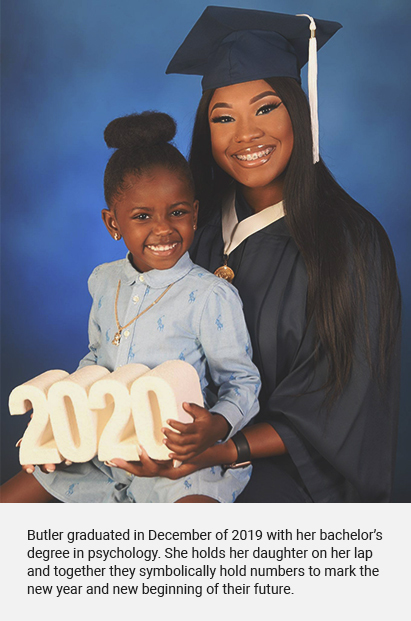 With 10-hour days on her feet as a mail carrier, Butler needed a program that would allow her to make a living and care for her daughter. U.S. News & World Report’s 2020 rankings has FIU at No. 12 in the nation for Top Performers on Social Mobility. Butler, who’s been working since she was 14, understands this ranking personally.

She chose FIU Online for its flexibility and convenience. She could access classes wherever and whenever she needed to, to be able to meet deadlines.

“I most definitely think that FIU helped me. It helped me achieve the life I wanted to live,” she affirms. Butler is currently pursuing her master’s degree in psychology fully online with FIU and hopes to one day become a social worker for at-risk and foster care youth. She leans on her daughter for emotional support and the drive she needs to complete her program.