Maria Dawson-Torres was one semester from earning her bachelor’s degree when she learned she’d have to start over. Then she restarted it – with the help of FIU Online.

Born and raised in Panama City, Panama, Dawson-Torres was a senior in administrative industrial engineering there when she moved to Florida. Imagine her shock when she discovered that none of her credits from Panama’s Universidad Católica Santa María La Antigua would transfer to any Florida university engineering program.

If she wanted a degree in two years from a good online school for engineering, Dawson-Torres would have to start over.

Then, life got complicated. Having moved from South Florida to the Tampa Bay area, she was working full-time, met her now husband, and set out to have a baby, only to learn from her doctor that natural conception would be impossible.

Still keen to return to college, Dawson-Torres enrolled in a state college that agreed to accept some of the Panama university credits needed to complete her associate’s degree on the path to her bachelor’s degree in childhood development.

Associate’s degree in hand, Dawson-Torres looked at several four-year universities—including some in driving distance from her home. None felt right.

Then, she discovered Florida International University. Her research revealed the university’s online degree programs seamlessly jelled with her work, life and academic expectations.

“I didn’t want just any university,” she said. “I wanted a university that would be impressive on my resumé.”

Once enrolled, Dawson-Torres discovered just how well the school fit into her increasingly complicated life. The shots and treatments needed for fertility left her body and mind exhausted. Insurance issues left her emotionally spent. Meanwhile, finances were tapped. A miscarriage led Dawson-Torres to a breaking point. Having failed her semester, Dawson-Torres withdrew.

Dawson-Torres contacted school administrators. Hearing her story, they agreed to waive the semester and allow her to continue her studies the next term.

“They were amazing in understanding that life happens,” she said.

Back in school in the spring of 2016, the couple conceived through in vitro fertilization. Dawson-Torres was working full-time and doing school work at night. Her daughter, Daniella, was born three weeks early. The birth was complicated and it happened during finals week that December. Dawson-Torres’ professors let her postpone her finals without blocking enrollment in January classes.

“I literally sent them a picture of me in the delivery room,” she recalled. 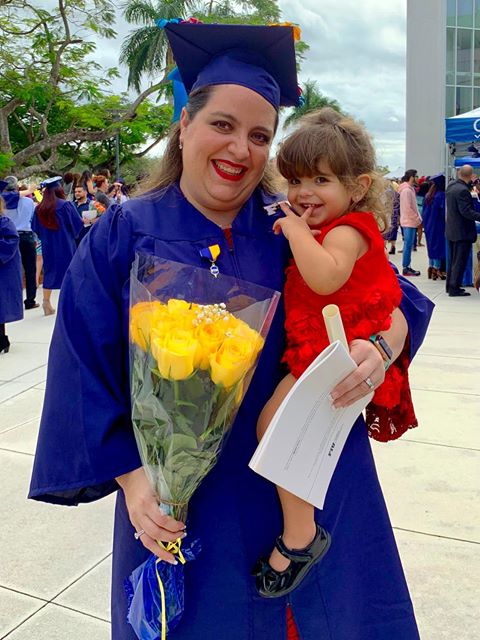 Online allowed life to go on in other ways, too. Laptop in hand, Dawson-Torres visited family in Panama and attended her brother’s wedding in Ireland.

“I’m not leaving FIU,” she said. “I couldn’t have done any of this as a regular full-time student. I managed to achieve my two biggest dreams, my degree and my daughter. They helped me do this.”