As a brand new, fully online student, Sergio Camacho recounts his real triumphs over his life events in 2020, which included personal, work and education changes during a pandemic.

For Sergio Camacho, the idea of going back to school was always in the back of his mind, so after a career change, and while he sought new employment, Camacho moved back home to Miami to be closer to friends and family.

There was a stipulation.

He was welcome to move back into his old room, but had to eventually finish the degree he started, said his mother. He put off the idea when he found a new position, but when he was furloughed in March, because of the coronavirus pandemic, he made the decision—it was time to finish his degree and make good on his agreement with his mother.

In the fall of 2020, he started his educational journey as a fully online FIU student pursuing a B.S. in Public Relations, Advertising, and Applied Communication. Online learning would allow him the flexibility to work once his furlough was reversed. He could also continue traveling and take his classes with him as things opened up.

“I knew that I loved remote work based on my previous job, so online learning was the right choice for me,” said Camacho who explained that he didn’t know the rest of the year would be a real test of his emotional fortitude.

In August 2020, as a full-time student, he began his first online courses. Just before that, his company, Front of the House (FOH) asked him to come back in a new role. His job, too, was remote, so Sergio had the ability to study and work where he wanted, but he remained at home, safely with his mother, ever watchful of the pandemic news in his family’s home country of Colombia. He spoke to family members daily, and his grandmother told him she was proud of him for going back to school and happy about his new job opportunity.

Camacho’s job with FOH had shifted. Working now with the company’s PPE division as a customer experience specialist, Camacho’s new division, FOH Health Essentials, was undergoing massive changes to better serve partners in the hospitality industry. His company provides single-use items like masks and sanitizing solutions for hotels and restaurants. He was tapped to develop sales for the PPE kits that address needs within the hospitality industry during the pandemic.

Busy with the work changes and his studies, Camacho looked forward to the holidays. His grandmother, with whom he was extremely close, would make her six-month pilgrimage from Colombia to Miami to stay with his family through the season and into the next year, which he hoped would be better for everyone. He looked forward to seeing her and all of the family being together. But things were about to change.

His younger brother gave him the sad news on Nov. 20. His beloved grandmother, the matriarch of his family, who had been sick with pneumonia, passed away at 82 years of age due to complications. She didn’t have COVID-19 but was “collateral damage” in a country stressed by the pandemic, said Camacho who added that he feels she didn’t have adequate care. She had been sent home to recuperate on her own. She became too ill and needed more help.

“On the way back to the hospital, she passed away in the car,” lamented Camacho. Family members were alerted within 10 minutes. It was his 14-year-old younger brother who relayed the news to him as his mother was too distraught to communicate. 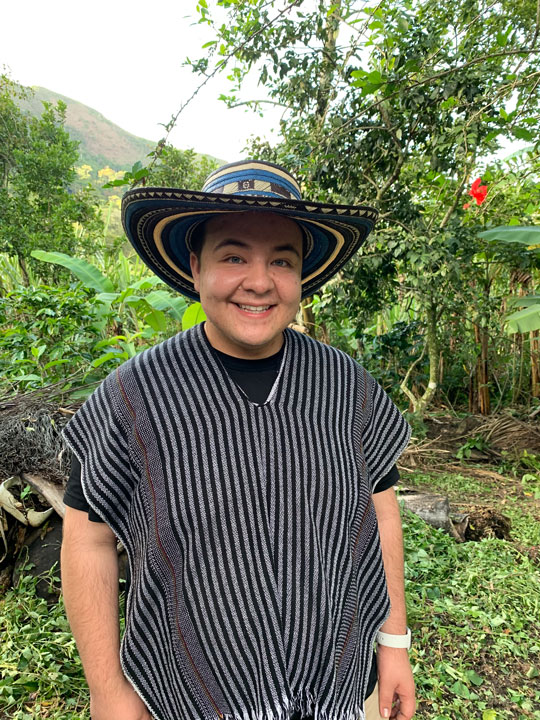 More than a month in Colombia

Learning the news, Camacho knew he would have to jump in and help the family with arrangements, so he contacted his professors and employer, made his reservations, and flew to Colombia to handle the family affairs.

“I continued to do my classwork and I was very fortunate,” expressed Camacho. “I received some extensions and was excused from some assignments.”

Camacho had to be in Colombia for more than a month to help with accounts and paperwork. During this time, he also continued to work remotely and help his company with social media engagement across platforms and noted that his online classes were “incredibly” helpful with knowledge he could readily apply to his work.

“I made the dean’s list. Online learning provided a seamless transition from here to there,” Camacho declared as he shared his heartfelt gratitude for the support he received from professors.

While it was a challenging year, Camacho has great hope and knows he made the right decision to finish his degree. While he misses her terribly, and it’s been a great loss, he feels his grandmother is with him and will be with him on the day he graduates.